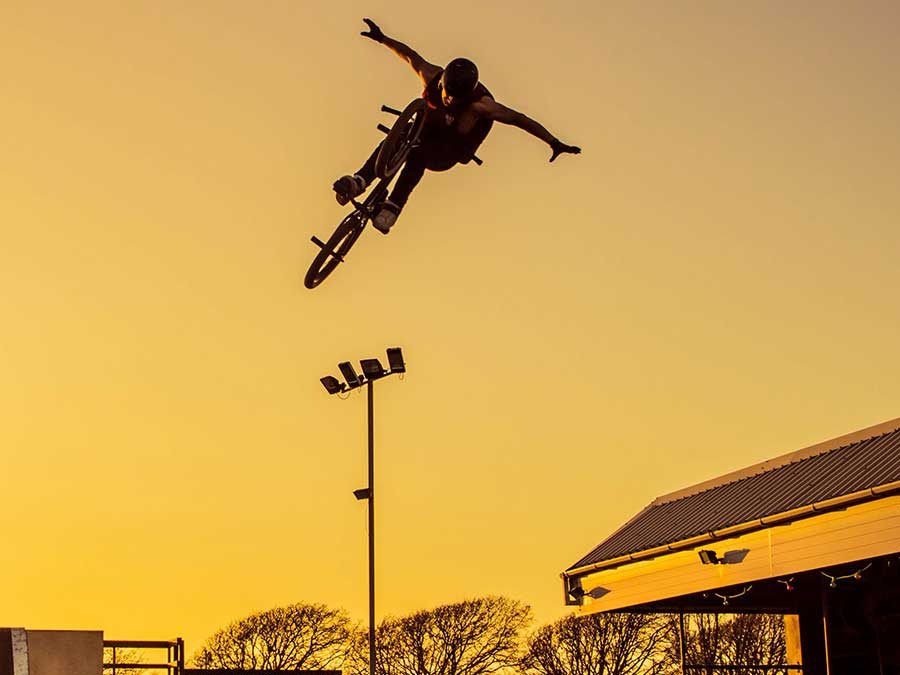 Southsea Skatepark has historically been a breeding ground for some of the best talent to come out of the UK, a few months ago the massive news broke that BMX Park would follow in the footsteps of snowboarding and skateboarding street and be included into the 2020 Olympics.

The Tokyo 2020 Olympics is now less than two years away and via the FISE World Series, riders from all across the globe have a chance to qualify for the Olympics. With 8 spots available in male and female, that is not an easy task at all. A once in a lifetime opportunity.

What has this got to do with Southsea Skatepark I hear you say?

Actually quite a lot… British Cycling with the help of decorated X games athlete Jamie Bestwick picked a team with back up riders that they feel have the best chance of bringing back the gold to the UK. Three of those riders grew up riding Southsea Skatepark!

Declan Brooks, Ben Wallace and Mark Webb (who still rides the park regularly). Declan Brooks was one of the first choices on the team, and has recently made the move from Portchester to Corby where he can train alongside other British Cycling athletes, Alex Coleborn and James Jones all year round.

I wanted to catch up with Declan to talk about the Olympics, and what it means to him and his family, and the ups and downs that come with pushing the sport to its highest level.

As cliche as it sounds, it couldn’t happen to a nicer fella! Go on Declan, bring the gold home!!!!

Congratulations Declan, you recently got a spot on the British Cycling team with a view to competing in the 2020 Tokyo Olympics. How do you feel about it?

It’s quite unbelievable really. When I came to Southsea Skatepark back when I was 9 years old for the first time, there was not one part of me that even thought about getting this far. British Cycling is the pinnacle of cycling in the world without a doubt. So to be apart of that is amazing. I feel honoured to be chosen But I feel I deserve to be apart of it 100% with all of the work I’ve put in over the last 5 years especially.

Absolutely Declan, few would argue with that. What has your journey been like to get to this point in your career?

A bloody rollercoaster. It’s really not been easy. Countless 3am sessions to then getting up at 6am to do a paper round before school, but that’s what you’ve got to do to get where you want to be. What you put in is what you get out. It really feels good now to be able to ride  full timed actually be funded to ride. I have no paying sponsors so to work as a plasterer and as a professional BMX rider before is not the most ideal set up.

You are currently injured, what happened and when do you think you will be back competing?

So after I got back from my second place finish in Saudi Arabia I was working on a New box banger at Adrenaline Alley. I’d done a few flip bar whips the previous day and I felt they were getting better and more confident. Long story short I slightly over rotated and placed my foot out. I put it down and basically rode over it. Broke both my rib and fib, now have a plate that covers my whole shinned countless screws just to add to my collection. I’ve actually just started physio a few weeks ago and I am planning to be back riding in July sometime… probably half way through. My next contest I’m focusing on will be FISE Budapest then FISE China of course.

You grew up riding Southsea Skatepark, what does the place mean to you?

Southsea Skatepark is up there with the most legendary skateparks in the world. When I started the scene was electric, it really was, sooo many guys killing it… well it seemed like that at the time. Maybe I was just a kid but I really felt like it was the BMX progression hub for the UK park scene. Everyone all over the country was watching what was to come out of Southsea next. You’ve always had a lot of diverse riders from the park as well, which brings a breath of fresh air to the table. I’m not there so much these days, but you still can’t beat a summer session with the boys at Southsea!!!

Summer vibes right now Dec, we miss seeing blast everything in your path at the park. How has life changed for you since the British Cycling team news broke?

Well the main thing is now its full time. All my energy is focussed on getting back to full health. Soon we’re be getting athlete programmes where they can work out exactly what we need physically and mentally to help further our riding and career. I’m getting looked after at the moment by some great physios and some nifty science gear to push and help my recovery. Other than that, James Jones and myself have actually moved to Corby. Now I can throw a stone to the skatepark from our place. Its sweet hahah. Unfortunately, I haven’t had the benefits of being that close yet as I haven’t ridden the park as I’ve been injured. But it’s not going anywhere hahaha.

Your parents I feel played a big role in the reason why your where your at in the sense of, the day after a podium finish there you are grafting away at work?

For sure, its me on the bike riding, but most of it is down to my parents. They’ve always pushed and believed in my riding ability from the very start so I have to give it all to them!
My dad has gave up hundreds of evenings and weekends over the years whether it was taking me to Southsea, Corby, Scotland or Europe. I’m just so proud to be doing so well, because I feel like I’m riding for them as well. So I’d just like to say I couldn’t have got this far without them… and I’m not done yet!!!

Thats the spirit Dec! From all of us here at Southsea Skatepark, we are rooting for you! Come on Brooksy, all the best for your exciting future!